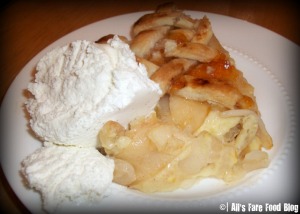 A few weeks ago, I conquered making my first cheesecake – with a few surprise accidents thrown in for good measure. This time, I attempted to make my first pie crusts and apple pie. Not wanting to do this alone since I have a huge fear of messing up pie crusts, I enlisted the assistance of Stacey from “Boston Sweetie Blog.”

We decided to have a baking afternoon last Sunday while the boys watched the Patriots game. So, we tackled the apple pie as well as some ridiculously awesome fall-inspired cupcakes stuffed with cupcakes.

Before leaving home, I prepared the pie crust using America’s Test Kitchen’s recipe for a lattice-top pie that has been adapted for use by Smitten Kitchen. Mixing the ingredients was a bit difficult since I don’t have a large stand mixer; however, my small 3-cup food processor was able to handle the job when I split the recipe in half. I decided to start the crust in advance of leaving the house so the dough had time to chill – at least one hour. But, you can make this recipe up to 48 hours in advance.

Next, the pie recipe came from the same article in the Milwaukee Journal Sentinel that I also found my first cheesecake recipe that led to chaos and fiery fun while baking. (Remember the key takeaway from that experience was butter + high heat = smoke) Thankfully, this recipe didn’t call for anything on high heat. The pie that resulted had a custard base with a layer of cinnamon and nutmeg-tinged apples (with a little body left to them), then a layer of warm apricot and a flaky, buttery crust.

In the end, my first pie experience wasn’t as terrifying as I thought it would be. Making a pie crust, while finicky, is still quite simple. You just need to prepare it in advance giving the dough enough time to rest and chill. You also want to remember to handle it as little as possible so it will remain flaky and wonderful. I think that’s where Stacey’s assistance really came in handy. Creating a beautiful lattice-top pie is HARD work. Flipping and weaving small strips of pie crust back and forth can get a bit confusing and you need some extra hands, especially with the sticky layer of apricot under the crust.

To make custard filling: Combine 1/3 cup sugar and the flour in a saucepan; mix well. Turn heat to medium and stir in milk. Bring to a boil, stirring. Reduce heat and simmer, stirring, until thickened, about 1 minute.

In a separate bowl, beat 3 egg yolks. Beat a few tablespoons of the hot mixture into the egg yolks. Then pour egg yolk mixture into saucepan, stirring constantly. Cook about a minute. Add 1 tablespoon butter and the vanilla. Remove from heat and cool. 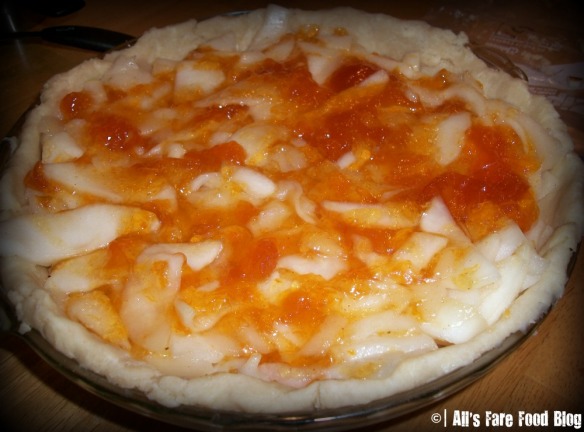 Putting it together: Roll out half the pastry and fit into pie pan. Spread custard filling evenly over the bottom, then top with apple mixture and finally with an even layer of the warm apricot preserves. (I actually substituted some fresh apricot jelly from the store at Brooksby Farms in Peabody, Mass.)

Roll out remaining pastry and cut 12 strips, 1/2 inch wide. Lightly moisten rim of the pie shell with cold water. Arrange six pastry strips across the filling; press ends to rim of pie shell. (We had a few leftover strips of pie dough so I’m not sure if that means the recipe is for a bigger pie crust, perhaps?)

Arrange the remaining strips in the opposite direction to form a lattice. Tuck and trim any edges, if necessary; crimp edges.

Mix remaining egg yolk with 1 tablespoon water. Brush on lattice strips but not edge of pie crust. Bake in preheated oven 40 minutes or until golden brown. At about 25 minutes, we took a gander at the pie and decided to cover the outside crust edges with some foil to prevent over-browning. 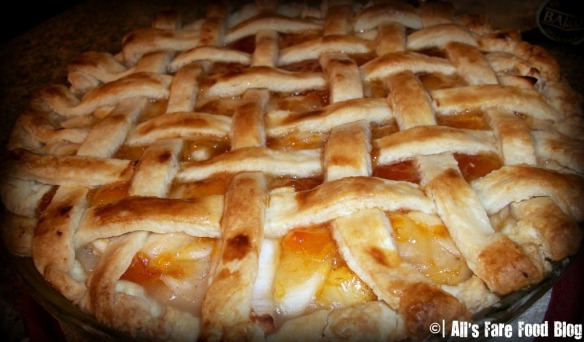 Served with a nice honking scoop of vanilla bean ice cream right out of the oven, this apple pie was deemed by some of my coworkers as their new “go-to” pie. That’s something to be proud of the first time at-bat.

1 thought on “My First Apple Pie”